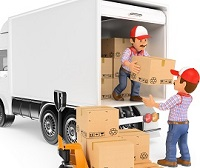 Covering all of Australia all the time using backloading removalists that know how to handle all types of furniture and goods. From pickup to delivery.

Free Quote for any Backload

A state to state backload using professional interstate backloading removalists. The Backloading Company are here to help you move from one state to another utilising an existing truck traveling in the direction of your move. How does that work you may ask? The backload is done by using a truck traveling back from another job. The truck may be passing a town or suburb you need to be picked up from. The Backloading Company then organise the size of your load and allocate space on the that truck for your goods to be moved. We backload to all states within Australia. Including Queensland Backloads, New South Wales Backloads, Victoria Backloads, South Australia Backloads, Northern Territory Backloads, Australian Capital Territory Backloads, Tasmania Backloads and Western Australia Backloads.

So don’t miss our on our amazing quote for backloads

Whether you live in a remote region of Queensland, New South Wales, Victoria, Australian Capital Territory, Western Australia, Northern Territory, Tasmania or South Australia. The Backloading Company have all your remote backloading needs covered. With over two decades moving home and office furniture throughout Australia. Backloads are a proven cost-effective service that is both reliable and professional.

What Backloads Mean for You

A backload can help you because its affordable. Having a backload done is the process of moving your goods on a truck that is traveling in the direction of your move. A back is a simple yet cheap way to move interstate. The Backloading Company cater to interstate backloads large and small for both home and office furniture goods. You may want to move a large amount of furniture from one state to another or a city in the same state to another city in the same state. This can be done by requesting a backload. You may also only have a few furniture items that need to be moved from state or state or city to city. The general idea is that backloads are most affordable for long distance moves.

The Backloading Quote That Won’t Break the Budget

A backload quote is easy to obtain by providing us with a list of items you want moved. This is called an inventory list. This helps us determine how much room is required on a truck to supply you with a free backload quote. There are many locations around Australia where we can provide backloading quotes. These include all major cities and towns including, Brisbane, Sydney, Darwin, Melbourne, Canberra, Hobart, Adelaide and Perth.

For the best interstate backloading quotes, call The Backloading Company. Now providing even most cost saving with any backload throughout Australia. Quotes on backloads are free and complimentary. Done by one of our professional staff ensuring you get the best moving price for home or office furniture. Relocating is easy with a backload. Let our backloading removalists handle all the hard stuff and get the best moving service quotes.